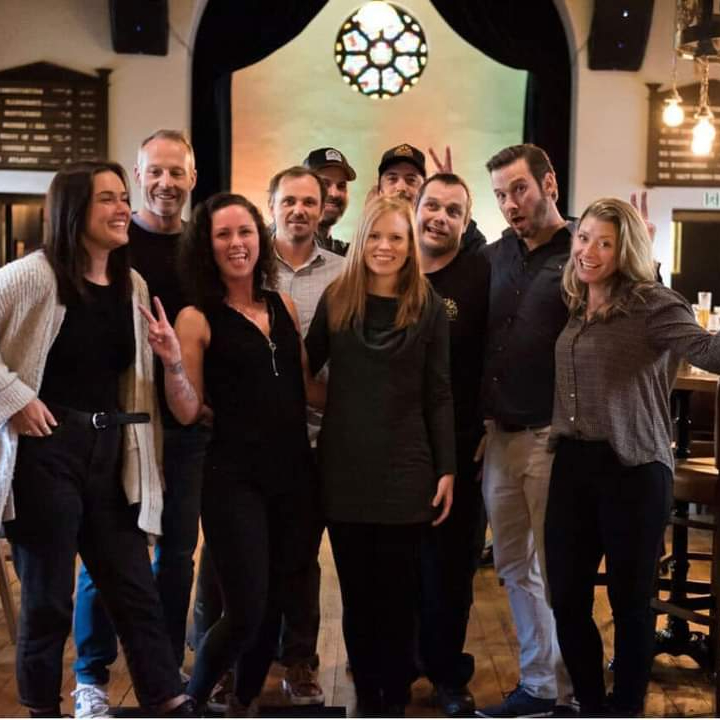 Church Brewing Co.
Address: 329 Main Street Wolfville, NS, B4P1C4
Email Address: sales@churchbrewing.ca
Phone: 902-599-1687
Website: churchbrewing.ca
About Us
The Location of The Church Brewing Company is rich in history and has been a place for the people of Wolfville– formerly known as Mud Creek–to congregate. The Church was originally built prior to 1840, as a Presbyterian Church, and located on Prospect Street. The structure was wooden and relocated in 1885 to its current location on Main Street. Unfortunately, it succumbed to fire in 1913.

The Church was rebuilt with stones from White Rock; red stones were used on the outer walls while Wallace stone was used to shape the windows and door arches. With help from Nova Scotia’s beloved architect, Andrew Cobb, and contractor, Charles Wright, the stone church was rebuilt. The cornerstone of the St Andrew’s Presbyterian church was laid on July 8th, 1914.

The beautiful stained glass memorial window, located on the east wall of the sanctuary, holds significant meaning. The window was built in 1975 to honour the memory of former congregations, spanning over two hundred years. The many natural colours used in the stained glass window represent the good that is a part of every person regardless of how their characteristics make them appear to others–hence the kaleidoscopic design chosen.

The Church was purchased by the Church Brewing Company in September 2017. The owners and co-founders began working with local project managers, designers, architects, and contractors, with great support from the Town of Wolfville. The restoration project included re-designing the church into a year-round restaurant and retail store, and the new construction of the attached microbrewery. The brewery, now completed, includes a 4-vessel 35-hectolitre brewing system and a separate 2-vessel 5-hectolitre pilot system. The restaurant opened its doors on January 30th, 2019, and initiated the first brew on July 4th, 2019. No detail has been overlooked in the restoration, and we invite you to come in and feel the warmth and beauty yourself. Come and congregate with us.
Practices
The team at Church Brewing Company prides itself in striving to achieve a rewarding business environment by adhering to a set of 11 guiding principles. Among these, are Health and Safety, Positive Social and Economic Difference, Equity and Diversity, Do unto Others, The Environment, and “Brew Good, Do Good” (our official Motto). This means that Church Brewing Company is striving year-round to support our local community and its organizations, build a superior local economy, take care of our local environment, and help those who have helped Church Brewing Company become what it is today.